Response: After Galadriel's Handmaiden enters play, choose a player. That player reduces his threat by 1.

Her maidens stood silent about her, and a while she looked upon her guests. The Fellowship of the Ring
Nathália Gomes 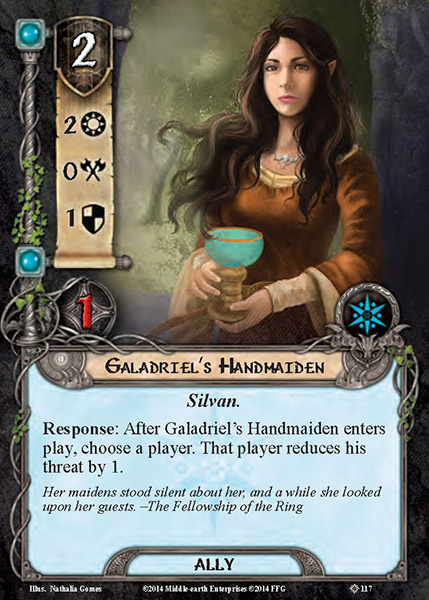 A very solid ally, just considering its stats alone. There's not that many with willpower > 1 and equal to their cost, and they usually come with some annoying caveats to their use. A straight-up two for two is good value, plus the small bonus of reducing someone's threat by one. Not a big deal, but nice. The Silvan trait could also come in handy if you're building around that, though 2 cost for just 1 threat each time means you won't be spamming it much.

Bilbo Baggins - 1 more HP, but disappointing outside of a pipe deck.