...the light of stars was in her bright eyes, grey as a cloudless night; yet queenly she looked, and thought and knowledge were in her glance, as of one who has known many things that the years bring.
The Fellowship of the Ring
Magali Villeneuve 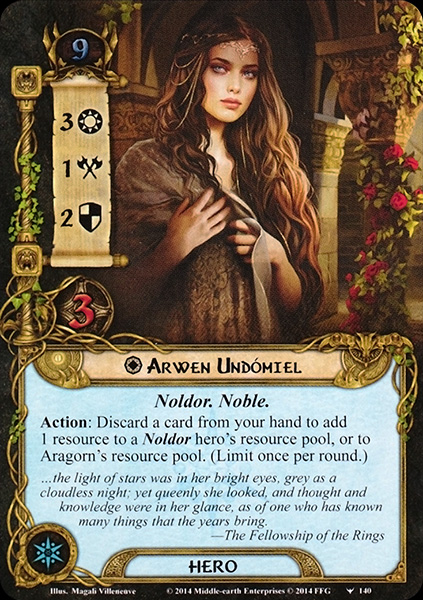 I was surprised to find that there have been no reviews on Arwen so far, as she seems to be a very popular - and powerful - hero. Well then, here we go.

You want some additional willpower? You need extra-resources every turn? You are looking for a reasonably cheap Spirit-hero without changing the rest of your deck? Enter the fair daughter of Elrond. With her 3 willpower she will probably concentrate on questing in most scenarios. Her combat-stats aren't spectacular, but if necessary she can block some smaller or medium-sized attacks as long as you can deal with unpredictable shadow-effects. Which shouldn't be a problem with Spirit (Hasty Stroke, Jubayr).

What really makes her shine, though, is her ability. Getting an additional resource every round from the beginning is more than helpful. Just think of all the good and expensive Spirit-allies (Northern Tracker, Elfhelm, Rhovanion Outrider) which tend to cost 3 or 4. Or remember how often you had to choose between playing a card or saving that one resource for A Test of Will. Why not enjoy the luxury of having both?

Note that she can give that resource to another (Noldor) character or to herself. She can even support her spouse Aragorn, but obviously she will often work with her father Elrond, who can pay for allies of any sphere.

Speaking of Noldor: in that archetype, discarding is no drawback but part of the fun. Think of Lords of the Eldar, The Evening Star or Glorfindel. The best card to complement her ability is, however, Elven-light, as you can switch between getting resources and cards just as the game-state requires.

Her only drawback is that you can't use the ally-version of her character (Arwen Undómiel). Apart from that, she seems to be one of the most versatile, straightforward and useful heroes in the game.

Finally, what I personally like about Arwen is that her mechanic somehow reflects the function of her character in the story of The Lord of the Rings, the book version, to be more precise. She is not the bold and active warrior-princess that is portrayed in the films. She's just that ever-present inspiration in the background for her people, her family and her Dunedain-love. Also consider the Tale of Tinúviel, ingame and story-wise.

One of the strongest Spirit heroes in the game. Arwen was later to enter the game as a hero but she sure made a splash once she did. Solid stats compliment a lower cost hero that can either quest or defend decently. But it's her ability that really stands out, similar to the core set Eowyn and SoH Spirit Legolas she discards a card from your hand to grant a benefit, in this case it's a resource, and it has further effect by being able to be placed on any Noldor hero or thematically her husband Aragorn, to smooth a multi-coloured hero pairing.

Obviously you want to combine her with some card draw to fuel her ability so you have things to spend your extra resources on, and on that note she combines excellently with the Elven Light card released in the same pack to be able to actually re-use the effect again and again while also giving up card draw. For fun try pairing her up with Spirit Legolas and Eowyn for some extra Elven Light madness.

She fits in any deck requiring a Spirit hero but also works particularly well with Noldor discard decks that want you to put certain cards in your discard pile. If you haven't tried her with Cirdan and Caldera, you definitely should.

There you have it, another massive thematic win and incredibly powerful representation of one of Tolkien'a female heroines. There aren't many of them in the original lore but thankfully all of them are well represented game-changing powerhouses.