Dúnhere can target enemies in the staging area when he attacks alone. When doing so, he gets +1 .

Captains rode to meet him at the ford, bearing messages from Gandalf. Dúnhere, chieftain of the folk of Harrowdale, was at their head.
The Return of the King
Jeff Himmelman 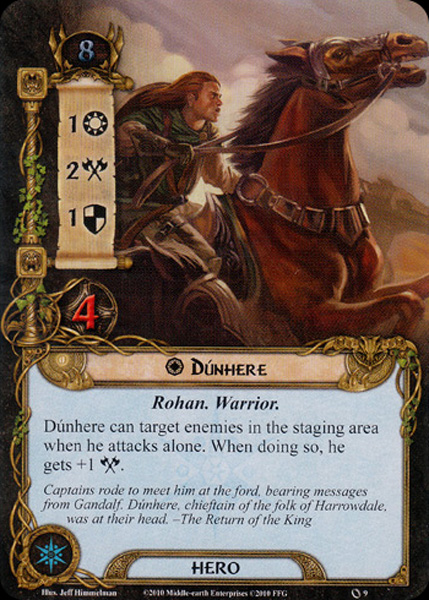 Ah, Dunhere. His life has been hard. Back when he was released he was fairly viable, but pretty soon, he became almost unplayable. Haldir, hands upon the bow, and great yew bow ensured this. However, with the release of T Eowyn, Dunhere decks have seen a massive resurgence. Try him out. He's underrated and pretty fun.

Dúnhere is my favourite glue hero from core set for 3 main reasons: acess to sphere, low threat and his attack ability. Boost his attack with anything you can and let him do his sniper things. His other stats are not so good, but I hardly ever use him for anything else. Artwork is ok. Verdict: 4/5.