Attach to a or a Scout character. 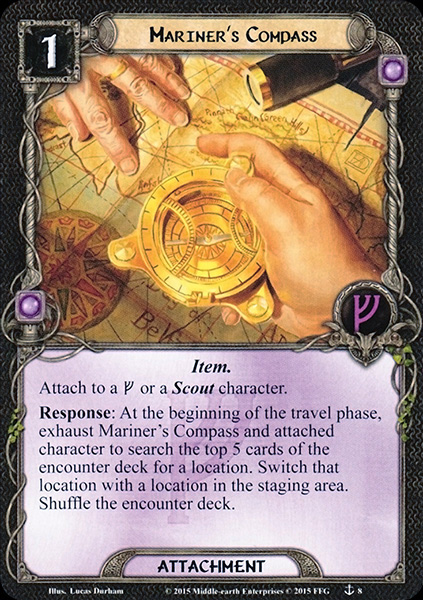 never thought much of this card, till i had a run in with nightmare locations. escape from dol-guldur has some of the nastiest locations in the game (torture chamber and dungeon labyrinth). These locations, even alone, could spell creeping doom. Together, they're terrifying (as well as other cards in the deck that add resources to them). Approaching this quest I tried to incorporate as many location control cards as I could. Thorin's Key, strider's path, and shortcut are all great in that quest, but I consider this attachment the single best card for that quest, simply because it allowed you to keep switching these nasty locations out before they ended the game. It's a weird thematic image though, using a compass to navigate a dungeon : )

breeduss 2
That's one of its best uses, I've found-get rid of non-prog counters on locations, like Time in The Antlered Crown (especially since the Time keyword doesn't seem to trigger if it's added, not revealed...) — AlasForCeleborn 131 8/10/18