Action: Exhaust Gandalf's Staff to (choose one): choose a player to draw 1 card, add 1 resource to a hero's resource pool, or discard a shadow card from a non-unique enemy.

...he held his staff aloft, and from its tip there came a feint radiance. The Fellowship of the Ring
Victor Maury 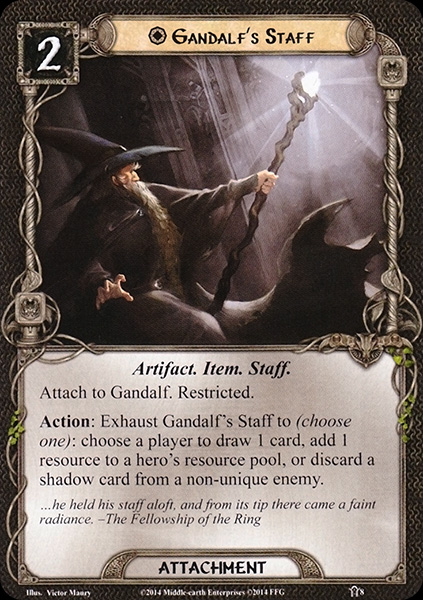 This is the second of the hero Gandalf attachments (after Wizard Pipe) which I would never omit from a deck with him. The rest are all negotiable depending on the nature of the deck. While the Pipe is obviously key to making Gandalf himself work to his full potential, the Staff is just an incredibly useful support card which can benefit any deck. I view it somewhat like Daeron's Runes - your deck may work fine without it, but it'll probably work better with it. Of course Gandalf's Staff is somewhat more limited than Daeron's Runes, being confined to Gandalf rather than to any deck running . The one downside of Gandalf's Staff is that it's Restricted, but this has never been a problem for me because despite having the best all-round stats of any hero in the game at base, I've never really felt the need to turn Gandalf into much more of a combat powerhouse than he already is by giving him Restricted attachments - his ability doesn't really support it, unlike many other heroes. Meanwhile the benefits of Gandalf's Staff: Flexible card draw and resource generation, the two central needs to making any deck run efficiently; and as a third option you can just remove some of the randomness from the game to make things perfectly safe for yourself by discarding a shadow card. My experience has been that most often I use the resource generation, but all three options are very useful.

So resource generation first. Since the Staff itself costs 2 resources, using it for resource generation will not increase the total number of resources in play until 2 rounds after you play it, the first two simply recouping the cost. However it's important to note that the resource generation is flexible - it can apply to any hero of any sphere, controlled by any player. So the benefit may be not to increase the number of resources you have, but rather the number another player has if they have some important but expensive cards they want to play - or the Staff could be held in reserve to provide the resource needed for an event like Secret Paths or Feint if it turns out to be necessary. Or within your own deck it may be beneficial in the short term to spend the resources from two of your heroes and put one back on the third due to sphere balance of your hand and the top card of your deck - so you may want to play a 2-cost in-sphere card in your hand or a 2-cost out-of-sphere card on top of your deck with Gandalf, and either option is entirely valid since the Staff is Neutral and can thus be paid for from any hero's resource pool. Even with these sort of points aside, most likely the game will last long enough to end up with an overall gain of resources over the full course of it, and that's simply viewing the Staff as a resource generator rather than considering its flexibility.

Next up, card draw. Not too much to say about this, it draws a card for any player, whichever player you think needs a card at the time, whether they're digging for something important like A Test of Will or Steward of Gondor or if they just need more cards in hand to discard for various benefits (another case where the Staff could be held in reserve could be simply to provide a player with the card he needs to discard to Éowyn, for example) or whatever else. Gléowine is an incredibly useful ally even now, and the Staff can provide exactly the same benefit minus the spare hit point (because seriously, who actually uses Gleowine to quest?) for the same cost but in Neutral rather than . Well worth it, and once again you have the flexibility.

Finally, the ability to discard a shadow card. It must be noted that of course this only works against non-unique enemies, so boss enemies will still cause you problems, but non-unique enemies can still be very dangerous, and removing a shadow card from something with, say, 5-6 can be a pretty big deal. With the shadow card removed you know exactly how much damage will be taken by whichever character is chosen to defend the attack. If they're still goinng to die, you know there won't be a shadow effect doing something horrible if the attack destroys a character. You know the enemy won't make an additional attack which you don't have the action available to deal with. You know the enemy won't return to the staging area and take away your chance to kill it either based on the shadow effect or because it's one of the various breeds of Warg which do that when they don't get shadow effects. Of course, to get the most out of this particular ability you'll be at your best if you have some sort of scrying so you know which shadow cards are worth discarding ahead of time. Something like Henamarth Riversong or Denethor could obviously show you one shadow card giving you some information to work with, but the most potent option is of course the Silver Lamp, which will show you every shadow card dealt to an enemy engaged with you, and if you really want to avoid one of them the Staff lets you simply remove it. And bear in mind if you want to go this route that of course even with no actual heroes you can still play the Lamp onto Gandalf himself if you play it from the top of your deck.

As a sidenote I should point out that while I have persistently referred to the Staff in the context of hero Gandalf, the Staff will work just as well on OHaUH Gandalf if you have a deck which uses him - the only places I've actually made a point about hero Gandalf's ability relative to the Staff were in giving additional options for the resources it generates and letting you put a Silver Lamp on him, both of which are useful, but far from essential to the Staff being good.

Overall, if Gandalf's Staff offered just one of its three options it would be a good card in each case, and certainly worth including if your deck needed more of that effect, but it wouldn't be an auto-include. What makes it so universal is not just the incredible power of the three effects, but the flexibility of the fact it offers all three in one card - situations can easily arise when one of the abilities would be irrelevant and if that was all the card did it would thus be less useful, but situations where all three are irrelevant are much rarer (indeed they may be more or less confined to "You've basically already won the quest") and so since the Staff offers you the choice of whichever effect you think most useful in a given round it's basically always going to be useful and so it's exceedingly difficult to justify ever omitting it from a deck which can make good use of it.

Auto-include in a deck using hero Gandalf. I'd even suggest 3x despite it being unique. It's the most flexible resource generator in the game, not as stupidly fast as Steward of Gondor, but I still prefer it because you can choose who gets the resources. If you're digging for something or just good on money, drawing cards is never a bad thing. Don't forget that you can and should use it on your teammates, who might be looking for their own combo pieces or holding a Feint or A Test of Will that will save your asses. Finally, there's the oft-overlooked shadow discard option, which I don't think I've ever used, but it could be relevant in some do-or-die blocking situations.