Gandalf does not exhaust to commit to a quest.

Forced: At the end of the refresh phase, discard Gandalf from play. You may raise your threat by 2 to cancel this effect.

Over Hill and Under Hill #10. Neutral. 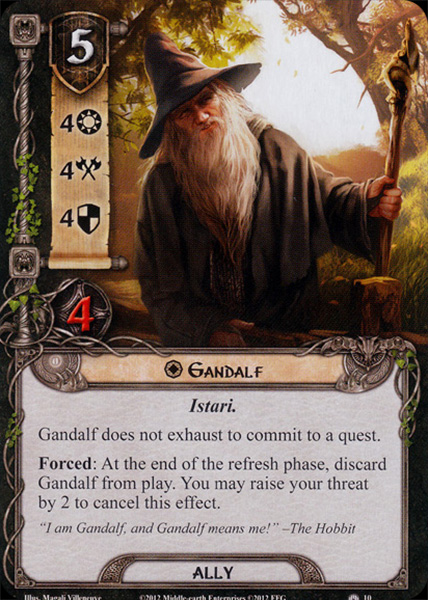 The inspiration for writing a review on this card resulted from a mistake I recently made while submitting a deck. I published a deck that was supposed to include this Gandalf, and instead included this Gandalf by mistake! Since I had already published the deck, I decided to throw in "mistake" Gandalf just to see how it worked out. As it turns out, his performance was stellar, and helped me to remember why I've always loved this card.

The first thing that stands out is that he has built in action advantage, an ability hard to come by with allies. Not only is he questing for "free" every round with a stellar 4 willpower, but he can also block or help take down even the stoutest of enemies in the same turn. It is notable that his cost/stat value ratio is incredible. An average ally is expected to have stat line equal to double it's cost, and a high value ally typically will have 1 extra stat point (i.e. 3 cost with 7 stats). Gandalf is 6 stat points over!! The best part is that his action advantage allows you to take full advantage of this incredible value. It makes great sense thematically also because, well, it's Gandalf. He shows up, guides the way, handles a tough situation, and then leaves for the discard pile. A wizard arrives and leaves exactly when he intends to.

The threat reduction necessary to keep him in play is just enough to ensure that you don't want him in play the entire game, and yet not enough to be prohibitive. I've found that the sweet spot for Gandalf is in two opposite deck archetypes. In a secrecy archetype, or one that relies on low threat to initially fuel deck mechanics, he is great for playing just after you have crossed the threshold where you are no longer gaining advantage from low threat (i.e. threat past 20 in secrecy)... and then leaving him in play for the majority of the game, since your threat should still be relatively low. I once built a successful (and thematic) Hobbit secrecy deck around this idea.

The other great archetype that he fits in is one that is focusing on the valour trait, in which Gandalf not only functions as a very powerful ally, but can actually help you manage your threat to approach 40 and trigger valor at just the right moment. In any deck, he is a clutch play when hitting the table at just the right moment of need and then hanging around for a couple of turns.

It's cards like this that require a little bit of finesse and timing that are the most enjoyable to unlock the full potential of.

MDuckworth83 1865
I love playing with this version of Gandalf. I have a Mono-Spirit deck that, though it has changed a bit over time, still includes this ally and when he hits the table he makes a difference. Use him with Spirit Merry and Gandalf can stay on the board even longer! — SecondhandTook 419 4/18/16
Teamed with Lore Aragorn you can keep him in play for potentially the whole game, making this Gandalf card a Gandalf killer... — RPete 4 5/3/16
When I saw this card, I thought that it was a little absurd for you to raise your threat by 2 just to keep him around. That was when I have not yet started to build low-threat decks. He works well with Hobbits but can also work well with the Spirit sphere when there are lots of cards/effects to reduce threat (like Noldor/Silvan, or Beregond). — milo.alejo 16 9/18/17
7

A big favourite of mine, and a card which a lot of people under-value. Everyone has a knee-jerk negative reaction to the extra 2 points of threat every round, but consider in contrast how much quicker and easier you will finish the quest if you have an extra 4 and 4 or every round? (Both combat stats if you use Shadowfax, or double use of one) The answer is that it makes a pretty significant difference, and as the proliferation of Boromir decks will similarly attest (not to mention Valour), threat raising just isn't as big a drawback as it used to be. Add to that the fact that with more and more sphere bleed, the need to have Core Gandalf cover effects you otherwise have no access to is no longer really a thing, and I would say this version of Gandalf definitely deserves to see way more play than he does.

There's little more to say - while some cards are complicated and nuanced, OHaUH Gandalf is pretty straightforward: so long as you're happy to eat the threat, you get two extra actions per round, each with a 4 in the relevant stat. But some additional thoughts on how to get maximum use out of him: Repeatable threat reduction like Galadriel and Merry will be incredibly effective at letting you keep him in play without suffering the threat penalty. Being heroes they're also not dependent on your random draw. Since he is Gandalf, you can use all the Gandalf toys: Gandalf's Staff to get more cards or resources or discard shadow cards, Wizard Pipe if you have means of interacting with the top of your deck (such as Vilya, Zigil Miner or another Gandalf toy in Flame of Anor), Shadowfax for another powerful action plus Ranged and Sentinel for multiplayer, and Narya, where since this Gandalf is an ally, you can have him target himself so he gets +1 / and readies another ally with the same stat boosts. Defender of the West allows you to spread out the threat raise around among players, and if you're using Shadowfax it doesn't influence his ability to assist less usually combat-capable players who may want him for that reason. He could also take the odd undefended attack, though you want to be careful about that with such a powerful character, and maybe consider investing in an Ent Draught if you plan on making that a consistent strategy.

All in all, if you build around Gandalf 2.0, as he is often known ("I am Gandalf 2.0, and Gandalf 2.0 means me!") he's amazing, but even if you don't he'll provide an incredibly valuable power boost for as long as you're willing to eat a little bit of additional threat. At this stage in the game I consider him more valuable than his Core Set counterpart in the majority of situations (i.e. when threat can be managed and you don't have Sneak Attack). One of the best allies in the game.

Example deck using this card: ringsdb.com (I also have a mono-Lore one but it needs editing as of this writing) And this one by Ian at Tales from the Cards the previous version of which inspired me to build mine: ringsdb.com

This is a tricky card to review, but as a first review it is perfect. So let's start with the stats. 5 cost , 4 , 4 , 4 , and 4 hit points. These stats are extremely effective, whether you are question attacking or defending. This was true for the core set Gandalf, but the abilities are very different. This Gandalf reads "does not exhaust to commit to a quest". This is phenomenal! That gives him the power to do two things for you in the same turn, or three with Shadowfax. Although you lose the enter play ability, you still get two powerful actions. This can be lifesaving if you need to quest and defend in the same turn, but can only afford one! The last part of this card is the tricky part. "Forced: At the end of the refresh phase, discard Gandalf from play. You may raise your threat by 2 to cancel this effect" in exchange to keep this powerful ally, you raise your threat by an extra two at the end of the round. This is good in the right deck. If you have a high threat this is not the card for you, but if you have a low threat or can reduce it "easily" then I would recommend this gandalf over core gandalf. Since this one can stick around, you can play attachments like Gandalf's Staff and Shadowfax on him to make him like a fourth hero! This version is a great card, and is often overlooked, but I feel it is worth it more to play this amazing ally in the right deck, even over the core we all love. Overall, amazing card and I always have fun when playing it!

Absolutley love this ally! I play him in a quasi-secrecy tactics Legolas, Spirit Glorfindel and Eleanor fellowship along with Shadowfax and his staff and he becomes an absolute machine. For the cost of 5 neutral resources you essentially get another hero for as long as you can handle the threat. With the aforementioned attachments he can use his staff to shore up weaknesses in your deck and with his Mount you can use him to quest, attack AND defend in the same round (or any combination of the latter) and he gains ranged and sentinel. And his stats are 4 across the board which match what the strongest of heroes only have one of in their base form (Eowyn, Beregond, Quickbeam).

Pack plenty of threat reduction and it helps if you start low, but the payoff to put in essentially a super-charged hero is well worth it.

Obvious limitations other than the threat limiting card options and starting threat you also have to acknowledge that the longer you keep him in play the less likely other players will be able to play their core ally Gandalf which is a staple in many decks, so some coordination is required.

But in solo or with careful planning this ally is one of the strongest. And pair him up with ally Treebeard to essentially almost double your power.

For a sample deck check out: